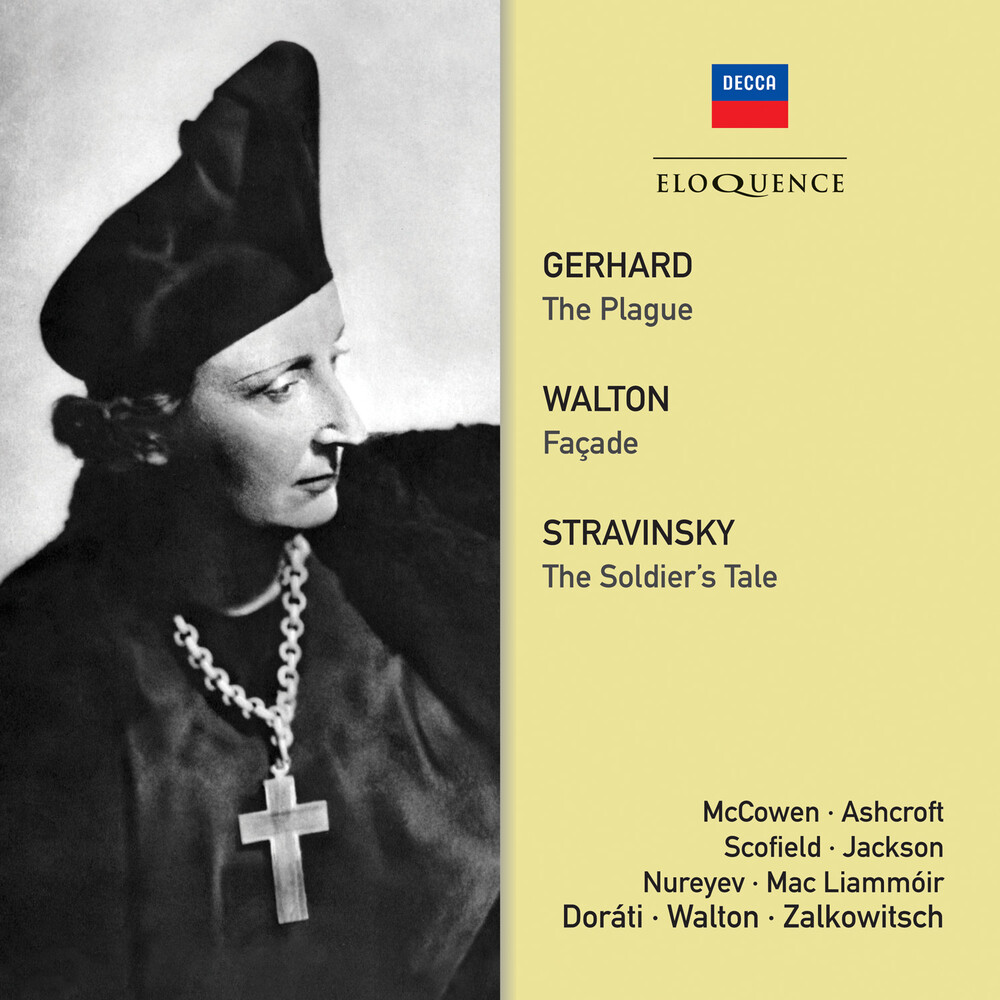 A trio of twentieth-century classics, sardonic and timely tales, in long-unavailable Decca/Argo recordings from the 1970s. Roberto Gerhard's imagination was immediately fired by reading Albert Camus' 1947 novel, La Peste, about a French-Algerian town in the sudden grip of bubonic plague. He determined to make a musical setting (The Plague), and after it's premiere in 1964 few were left unmoved, or in any doubt about the work's significance as a bitter, retrospective allegory on the evils of Nazism so recently extinguished. Now that Gerhard's score has taken on a new and unwonted relevance, this reissue of it's first recording on Argo should win new converts to his music. It is led with remarkable sympathy by Antal Doráti, the Hungarian-born conductor who had become a friend of the composer as well as a mainstay of the Decca and Mercury catalogues. It was through Gerhard that Doráti met William Glock, who engaged him as principal conductor of the BBC Symphony Orchestra. Also originally issued by Argo, the 1972 recording of Walton's Façade enjoys a unique authority as the composer's only stereo version of the score, featuring Peggy Ashcroft and Paul Scofield as narrators. Though Walton arranged and revised the score many times after it's scandalous premiere in 1922, for the Argo recording he returned to his 1951 version scored for the original combination of six instruments. Ashcroft - in the tradition of Façade's author and first narrator, Edith Sitwell - and Scofield declaim the absurdist texts with all their famed resources of nuance, timing and eloquence. To record The Soldier's Tale in 1975, Decca acquired the services of Glenda Jackson, known worldwide at the time for her Oscar-winning performance in Women in Love (1969) and Ken Russell's next film, The Music Lovers (1970), in which she played the unfortunate wife of Tchaikovsky. She was joined in Decca's Hampstead studios by the Irish actor and founder of Dublin's Gate Theatre, Micheál Mac Liammóir, and none other than Rudolf Nureyev, who gave a somewhat stilted, authentically arch performance as the Soldier of the tale. They were backed by a small ensemble of expert London-based musicians, headed by the former leader of the London Symphony Orchestra, Erich Gruenberg, in a rare, complete recording of Stravinsky's original version of the score, with a new translation of the narrative.